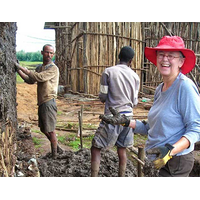 Marian Haley Beil is co-founder and publisher since 1989 of the Peace Corps Writers newsletter, website, and book imprint. Following her tour of service, Marian worked for four years in the Office of Reports and Special Studies at Peace Corps Headquarters. She founded the Ethiopia & Eritrea RPCV affiliate group in 1991, and later co-founded Rochester RPCVs.

During her stint with the E&E RPCVs for over 25 years, she served as president, treasurer, database manager, and website designer.  She edited the print version of The Herald, the newsletter for E&E RPCVs from 1991-2000 and served as the layout editor for the print and online version thereafter.  In June 2015, she stepped down as President (and other duties) to follow other pursuits.

Former Herald editor, Barry Hillenbrand, penned an eloquent tribute to Marian in the September, 2015 edition of The Herald stating:

It’s hard to think of the E&E RPCVs without Marian at its head. It’s a bit like the Yankees without Jetter. Or “The Daily Show” without Jon Stewart. There hasn’t been much that has been done by E&E RPCV over the years that happened without Marian’s direction, and hard work.