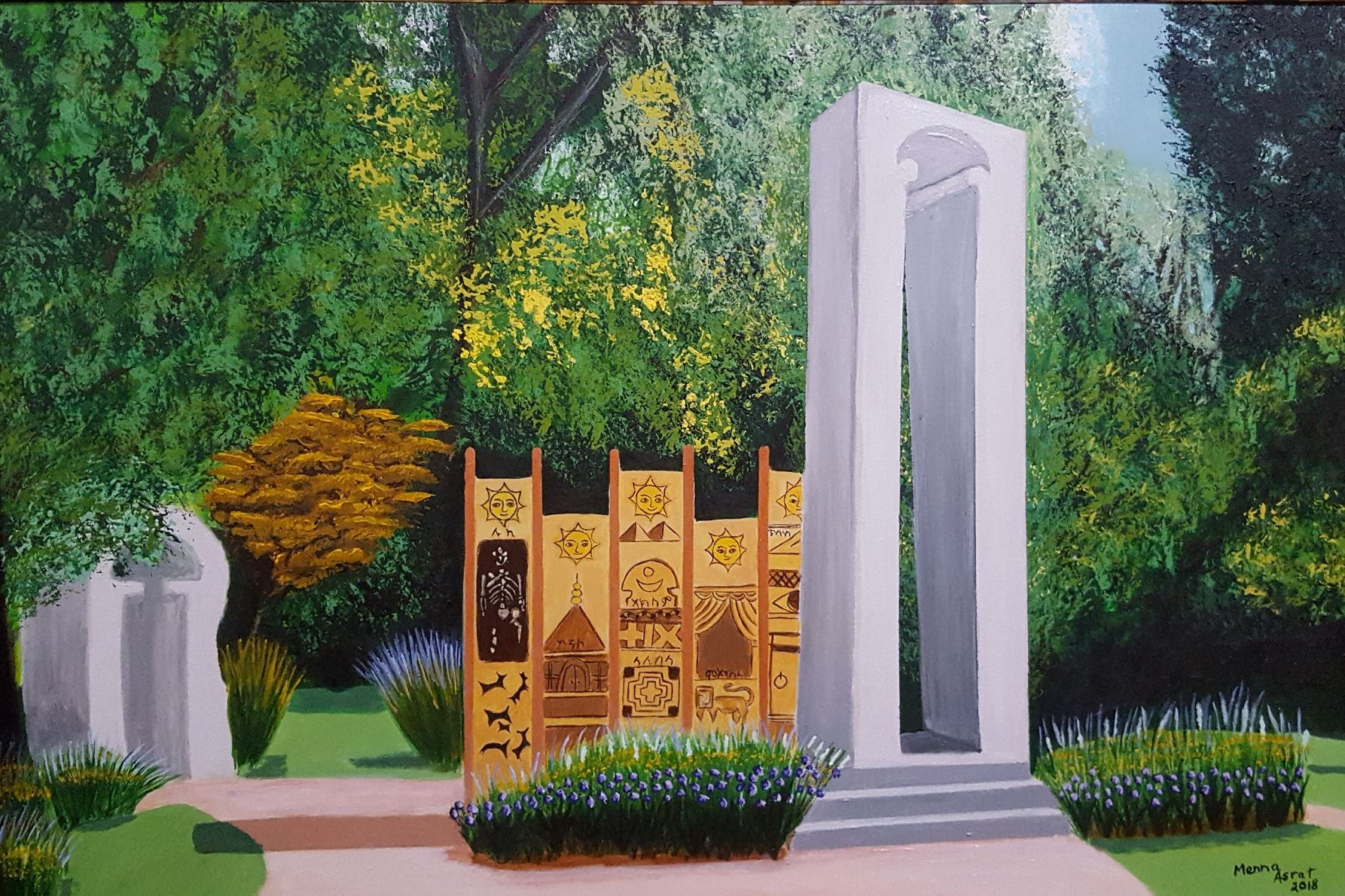 The Ethiopian Cultural Garden, the 37th in the parade of Cleveland Cultural Gardens,  and the first representing an African country, has been a labor of love for a dedicated group of Ethiopianists, including RPCV Herb Resnick, (Harar, 1962-64). Committee members have noted of this elder statesman that he has been a pivotal member of the committee and the project would not have come to a completion point without his tireless dedication. As a result of Herb’s connections, the Peace Corps played an important part of the garden and will be recognized on the dedication plaque.  Herb welcomed COVID-19 evacuated RPCV Chase Goldston (Laaloo, Jimma Zone, 2019-2020) to the fold, representing both ends (Ethi I and G-20) of the Peace Corps Ethiopia spectrum.

Herb would be the first to say that it takes a village and would share the accolades to fellow Ethiopian Cultural Garden committee members who served under the umbrella of the Menelik Hall Foundation, a charitable 501(c)(3) organization, incorporated in 1987 in the State of Ohio, and dedicated to support projects primarily for, but not limited to, Ethiopia and Ethiopians.

The Ethiopian Cultural Garden project is being developed in three phases. Phase One – a large mosaic mural of Ethiopian history – is completed and was dedicated on One World Day, August 24, 2019 with Ethiopian Ambassador Fitsum Arega as its invited guest. It is the only such monument to Ethiopia on this scale outside of the country itself. The committee worked tirelessly over a seven-year period to raise the necessary $75,000 funds with an additional $24,000 needed to fully complete Phase One.  Phases Two and Three necessitate raising an additional $250,000.

Back Panel:    “When the Sun Gets the Moon”.  This painting by Zerihun Yetmgeta from 1987 carries an environmental message; even though humans developed technology to land on the moon, on Earth we see forests destroyed, cities overcrowded and polluted, and the Earth over-heating from the unmitigated rays of the Sun. He says, “Despite modern technology, the earth is being devastated”. This painting takes us full circle: from the dawn of humankind, great ethnic diversification, national unity and independence under Emperors, to heights of technology by an overpopulated humankind in this age where everything has a global effect, and now to the unthinkable possibility of “collapse of our civilization and the extinction of much of the natural world,” (Richard Attenborough). This painting is a plea from Ethiopia, where the human race originated, for us to do much better if we hope to avert this eventuality.

Plantings in the landscape design, by our landscape architect Heidi O’Neill, will represent the color and diversity of Ethiopian flora. Our thanks and appreciation to Ethiopian contemporary artist Zerihun Yetmgeta of Addis Ababa for concept design, sketches and painting of the history mural. 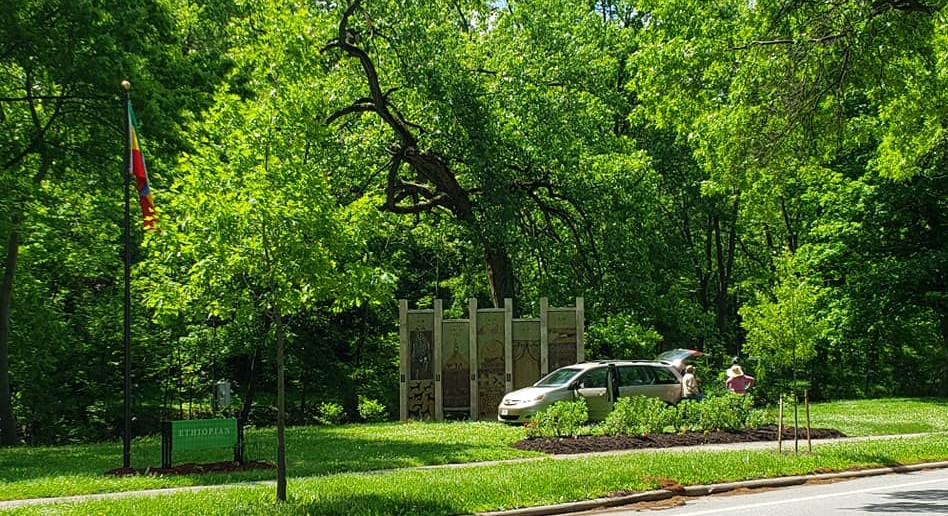 PHASE ONE: Five-paneled historical-cultural mural mosaic – 12 x 18 feet, 5-paneled wall structure of reinforced concrete, upon which Ernesto Spinelli will apply the glass-tile mosaic renditions of Zerihun Yetimgeta’s work, including on the 2nd side, the environmental piece, “When the Sun Gets the Moon”(1987).

A stone patio depicting a map of Ethiopia and showing the traditional original provinces of Ethiopia will connect the three phases.

Follow the Ethiopian Cultural Garden Facebook page for continuing updates.  A GoFundMe page has been created for contributions. 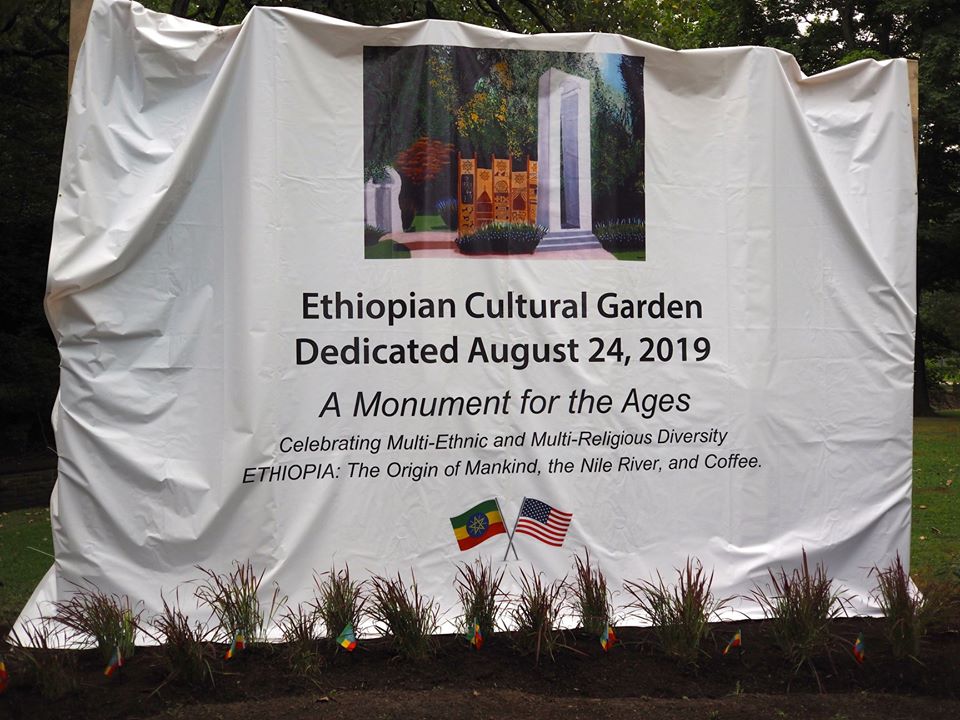